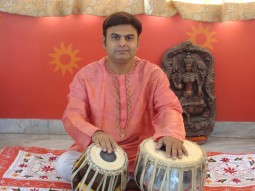 Born in February 16th, 1966 in Calcutta, Sandip’s father Mr. Bhupendranath Banerjee recognized his son’s natural talent and ability at a very early age.  He carefully inspired and encouraged him to begin his ‘riaj’ (study) on tabla drums, at the tender age of 7, under the premier tabaliya (tabla player) of his time the Late Pandit Kanai Dutta of the Farukabad Gharana (school).  For 5 years Sandip flourished in the great tabla maestro’s care until his untimely death in 1977.  Devastated but determined to continue riaj, Sandip and his father turned to another of their gharan’s eminent tabaliya Pandit Sanjoy Mukherjee.  Under his new Guru’s (teacher’s) guidance and after years of intensive ‘sadhana’ (practice), Sandip was awarded ‘National Scholarship’ from the Government of India in 1992 and in 1997 he completed 20 years of advanced training under his Guru Pandit Sanjoy Mukherjee.

In the Indian tradition of lifetime ‘Sadhana’ and aesthetic improvement and being dedicated to mastering even the most subtle nuances of the tabla (rhythm), he is currently receiving specialized training from the renowned tabaliya Pandit Shankha Chatterjee, senior disciple of Late Ustad Keramotulla Khan and great Late Ustad Allarakha Khan Sahib.

Sandip’s good taste and even temperament are reflected in his solid soulful style of playing.   In India he is well known for his graceful accompaniment and with his powerful adept solo performance, he appears regularly on T.V. and Radio with country’s top recording artists such as Sitarist Pandit Dipak Chowdhury, Sarodist Pandit Tejendranarayan Mazumdar, Guitarist Pandit Barun Kumar Pal, Sitarist Pandit Monilal Nag, Sehenaist Ustad Ali Ahmed Hussain.  He has toured Europe with such artists as violonist Kala Ramnath, singer Shaila Piplapure, flutist Harsh Wardhan, sitarists Ashok Pathak, Sanjoy Badyopadhyay, Partha Bose, Kushal Das and Purbayan Chaterjee, sarodists Partha Sarati & Biswajit Roy  Chowdury an others. He is also an All India Radio Grade A Artist.
Included in his demanding schedule are frequent trips to abroad, to perform, lecture and conduct his popular drum workshops.  His ability to communicate and his common sense approach to teaching and performing this art, win him many enthusiastic students and admirers everywhere he travels. He has collaborated with tiptar player Daniel Schell for various musical and educational projects.
A rare combination of talent, dedication and good sensibilities have brought Sandip to the top of his art.  Such rare qualities have made him a much sought after performer and teacher both in India and abroad.
Lovers of Indian Classical music around the world will continue to be enthralled by this first class mature and powerful performing artist now and in the years to come.

– With Daniel Schell ‘Night in the Mountain – Clic Music